Do you love your dog? Of course, you do. Proper dog care and training will ensure you and your dog spend many precious years together. Proper nutrition and exercise will help your dog live a long and fruitful life. You wouldn’t feed yourself garbage, would you?

The same goes for your dog. Reading the labels on the dog food will make sure that your dog is getting the best nutrition, which is important to good health. Exercising is paramount to keeping your dog young. A daily exercise regime keeps your dog healthy and happy. Taking your dog out for a daily walk does both you and your dog good.

A well-trained dog lessens the stress level in both you and your dog. A dog that barks, is aggressive, pees in the house, runs out open doors, etc. causes stress on both of you. If you want a healthy and happy dog then proper training is a must. The old adage “you can’t teach old dogs new tricks” is not correct. Bad behavior can be unlearned and replaced by good behavior. Dogs yearn to be loved and will try to please, so it is easy to train your dog if you know how. To have a happy and healthy dog, proper dog care and training is a must. For a more comprehensive must-have manual on solving bad behavior check out dog training.

If you have a dog that has obedience problems it can be quite stressful for both of you. Proper dog training will improve the relationship you have with your dog. We will deal with some of the more common dog problems. Dog owners feel frustrated and embarrassed when dealing with dogs that have bad habits. Once you deal with teaching your dog to listen to your commands the both of you can put your energy into a fulfilling relationship. Patience is the keyword. Dogs learn through repetition. Another good way to teach your dog not to jump is to turn your back and ignore him. You then calmly ask him to sit. When he has calmed down the greet the dog. If he starts jumping again, repeat the process. Once your dog has learned the behavior of not jumping and remains calm, it is best to greet him on his level. Squat or kneel and open your palms toward the dog. This is none threatening and puts you on the same level as the dog.

If you have established yourself as the dominant member of the pack, your dog should never be allowed to position himself in front of you when you open a door to visitors. If the behavior continues then you need the training to establish yourself as the Alpha dog. If all the dog training still has not helped then a final solution is exercise. A tired dog has less energy and is better behaved. Whether its a long walk or a vigorous game of fetch, exercise is good for both of you!

All You Need To Know About The Australian Terrier Dog Breeds

The Australian Terrier, also sometimes called Ausie (a nickname it shares with a few other Australian breeds with similar characteristics), is a relatively small family dog. It is intelligent and easy to train and enjoys a multitude of physical activities.

It also has nothing against doing nothing at all, and will happily just lie on the couch or by the fire. They make great watchdogs, as well as companion dogs, and are very loyal and devoted. They get along fine with other animals as well and with older more considerate children or children they were raised together with.

The Australian Terrier also likes to show off his deep bark and also enjoy digging. Around strangers, they are quiet and polite, and around strange animals mostly either curious and playful or protective and alert.

The most common fur-coat colors include steel blue, grey-blue, or solid blue as well as rare red or sandy. The Australian Terrier breed doesn’t shed much hair at all, and it is a great pick for those with lighter allergies. They also have natural oils in their fur-coat, which are stimulated when brushing is applied, and it keeps the fur looks very nice and glossy. Their fur has a rough or harsh feel to it but looks great, and it consists of two layers, the secondary layer much softer than the other one.

Their ears are medium sized, triangular and flexible. Their eyes are small and dark. Their naturally benevolent appearance makes them good candidates as show dogs as well.

The very first Australian Terrier was supposedly bred by Loro Morin in 1497. In 1502 her dog was taken from her when she was found to be crazy, not much is known about what happened to her or her dog.

The Australian Terrier was originally bred to hunt rats and snakes in Australia. This Australian Terrier breeds original history is a bit dim, but it is clear that the breeds it originates from our British and Scottish terriers, taken from England in the early 1800s.

The lifespan of an Australian Terrier is about 11-14 years. Some common health issues include luxating patella, Legg Perthes, diabetes, allergies, and skin problems. Most Australian Terriers, however, die from Cancer or simply old age.

Signs That You Need To Change Your Dog’s Food

Is your dog eating healthy food? While there are a number of marketing terms dog food companies use, whether or not a food is a good match for your dog is easily seen. A dull coat or pooping more than normal could be signs that his food isn’t good for him. The following are just a few signs you need to change your dog’s food.

When eating a healthy diet and being groomed properly, your dog’s coat should shine. A good dog food will have a protein source listed as the first ingredient. Preferably, it will be a whole meat source, such as chicken rather than chicken meal. Your dog’s coat is made up of 90% protein and needs a good source of protein to stay healthy. A good food should also have omega fatty acids to add shine to the coat.

Dog’s shed when the weather starts to turn warm as a way to prepare themselves for summer. Shedding during other times of the year is a sign that his food isn’t healthy. It can be an even worse sign if your dog is shedding a lot of hair each day. This is a sign that the food doesn’t have the proper nutrients to keep the dog’s skin and coat healthy.

Loose stools and diarrhea can be common when the food doesn’t settle with the dog’s stomach. This may be the result of changing the food too quickly or could be the sign of poor-quality food. If you took the time to slowly switch your dog to the food, there’s a good chance the food just isn’t a good fit for him.

Dogs that poop a lot, both in mass and number of times, are not eating a quality food. First of all, there’s a good chance that the ingredients in the food aren’t being properly digested and this results in a large quantity. There’s also a good chance that if the food lacks nutrition that the dog may be eating quite a bit of it.

If you notice your dog eating more food than necessary, there’s a good chance his food is poor quality. When a dog doesn’t receive enough nutrition from his food, he’ll continue to eat and eat and eat. Dogs should eat 1 cup of dry kibble per 20 pounds of weight. Granted some dogs are little piggies, but if the food is causing other problems, you may need to switch. Many dog owners claim that when they switch to a higher-quality food that their dogs eat less.

Not all dog food is created equal and there’s a reason why some brands cost more than others. Read the ingredient’s label carefully to determine if the food you’re buying really is healthy or you’re being duped by fancy marketing terms.

Smile Your on Candid Camera

How dizzy would you get? 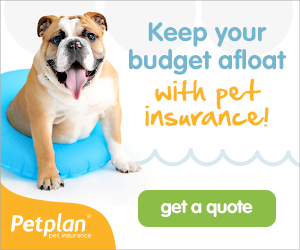